Pet vaccinations fall by 18 per cent 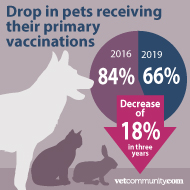 “It’s very worrying for vets and vet nurses to see a consistent decline in the number of pets receiving their primary vaccinations."

The number of UK pets receiving primary vaccinations has fallen by 18 per cent in just three years, according to new figures.

Findings from the 2019 PDSA Animal Wellbeing (PAW) report have fuelled concerns that the ‘anti-vax’ movement in humans may also be affecting pets.

Primary vaccinations for dogs, cats and rabbits fell dramatically from 84 per cent in 2016, to 66 per cent in 2019, potentially leaving millions of pets at risk from deadly diseases.

Furthermore, a third of pets (32 per cent) are not receiving regular booster vaccinations.

Pet owners who did not vaccinate their pets said they chose not to because they felt it was ‘too expensive’ (17 per cent), their pet does not come into contact with other animals (17 per cent), vaccination is ‘unnecessary’ (16 per cent) or their pet ‘finds going to the vet very stressful’ (13 per cent).

PDSA senior vet Sean Wensley said: “It’s very worrying for vets and vet nurses to see a consistent decline in the number of pets receiving their primary vaccinations, as well as a third (32%) not receiving regular boosters. A resulting loss of herd immunity could see a resurgence in preventable diseases that can cause considerable suffering and death.”