‘Hereditary clear’ status to be limited to two generations 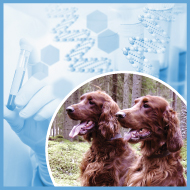 The change "ensures that breeders can remain confident that the puppies they produce remain free from disease".

Change will support the eradication of health conditions

The Kennel Club has announced plans to limit the assignment of ‘hereditary clear’ status of registered dogs to two generations.

The change, which comes into force in January 2022, will be put in place to safeguard the impact that dogs with an incorrect ‘hereditary’ clear status could have on health issues within breeds.

The decision follows the recommendation of the Dog Health Group after a study published in the journal Canine Genetics and Epidemiology.

“This change to hereditary status reinforces that view and ensures that breeders can remain confident that the puppies they produce remain free from disease. DNA tests are helping breeders eradicate health issues in dogs and we want our registration system to maximise the impact these tests are having.”

‘Hereditary clear’ is a term given to dogs that are determined to be free of specific genetic material linked to a particular inherited disease. The Kennel Club assigns a dog this status if its parents are known to be clear, either because they have both been DNA tested as clear, or because they are hereditary clear themselves.

Dogs can be mistakenly given a false hereditary clear status if there has been a failure of laboratory protocols, pedigree errors or incorrectly recorded parentage. In these cases, it is unlikely that inaccuracies would be noticed straight away, but rather several generations later.

As a result, many dogs throughout the breed descended from the individual with the original incorrect status will also have erroneous hereditary status, and the well-intended mating of two 'hereditary clear' dogs risks producing affected puppies.

To reduce the knock-on effect of such errors, the Kennel Club will be ensuring that ‘hereditary clear status’ will be limited to two generations unless lineage is verified by DNA parentage profiling recorded by the Kennel Club.

DNA parentage profiling is a separate procedure to screen DNA for disease-causing mutations, but can often be performed simultaneously by the same laboratory.