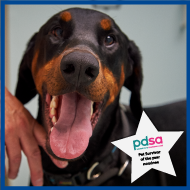 Winston has been nominated for the 2019 PDSA Pet Survivor awards, which recognise pets who have survived against all the odds.

A Doberman who made a 'miraculous' recovery after suffering Gastric Dilation-Volvulus (GDV) has been entered into PDSA’s Pet Survivor competition.

Two-year-old Winston was rushed to the PDSA pet hospital in Basildon after his owner, Stella Draycot, noticed that he had stopped eating and couldn’t keep anything down.

Thanks to Stella’s quick actions, vets were quickly able to diagnose Winston with a developed case of GDV, which can be fatal in a matter of hours.

“He just wasn’t himself and I didn’t know what to do, so I took him to the PDSA Pet Hospital,” said Stella. “After the vet examined him, they discovered he had a twisted stomach and I was told that his chances of surviving were very slim.

“I was in shock and the thought of losing him left me in floods of tears.”

PDSA Vet, Hannah Johnston, explained: “When Winston arrived at the Pet Hospital he had a tender, swollen tummy and was trying to be sick but nothing was coming up. We were really concerned about these symptoms and took him straight for an x-ray, which showed a massive, gas-filled, ‘C’ shaped stomach.

“We knew immediately that we had to act fast, as this can kill a dog within hours if left untreated.”

She continued: “Winston was immediately prepped for emergency surgery to untwist his stomach, but because of his deteriorating condition the anaesthetic he needed posed a much higher risk. We prepared his owner for the worst but we were determined to do everything we could to save him.

“The surgery went as well as it could have, and we also placed some internal stitches to secure the stomach to the body wall to try and prevent it from twisting around again.”

Winston made a full recovery from his surgery and is now back to enjoying walks with his friends.

“I feel that Winston is a miracle dog for surviving,” Stella continued. “The treatment and care he received from PDSA was fantastic, I’m so very grateful that they saved his life.”

Stella has entered Winston into the 2019 PDSA Pet Survivor awards, which recognise pets who have survived against all the odds. The awards are open to any pet treated in the UK by a vet for a life-threatening illness or injury between 1 August 2018 and 31 August 2019.

The winner will be decided by a public vote later this year and will be crowned PDSA Pet Survivor of the Year 2019.